Here you can find curated stories of soldiers mentioned in the SARCIB packets. 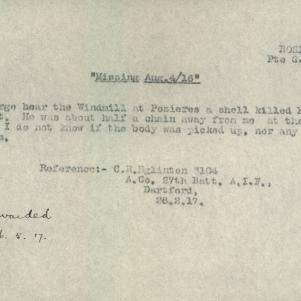 Private Russell George Bosisto was killed in action at Pozières on 4 August 1916. His remains were not able to be recovered and buried. However, in January 1998, a farmer unearthed the body of an Australian soldier which was subsequently officially identified as Bosisto and he was reburied on 5 July 1998 at Courcelette British Cemetery in France.