Here you can find curated stories of soldiers mentioned in the SARCIB packets.

Four brothers from the same family enlisted within months of each other and served together in the 12th and 52nd Battalions. Only one returned to Australia.

Herbert Selmar Conrad, a veteran of the South African War, landed at Gallipoli with the 16th Infantry Battalion on the evening of 25 April 1915. One of the few nurses to appear in the records of the South Australian Red Cross Information Bureau, the contents of Atkinson’s packet document the confusion about when and by which ship she would be returning to Australia. Burman’s mother sent a very anguished letter to the South Australian Red Cross Enquiry Bureau requesting details about her son’s death. The letter is one example of many in the records of the enquirer knowing of the death of their love one, but desperate for further details about the circumstances of the death. 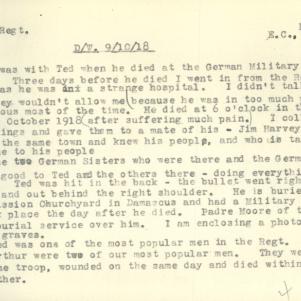 Private Edward Pearce Hanrahan, 9th Australian Light Horse Regiment, was severely wounded and taken prisoner at Sasa, Syria. The explicit details of his condition and subsequent death given by eyewitnesses were omitted from the correspondence with his his family to spare them the upset of knowing the agony he suffered in his last days. Private Michael James Bailey was involved in the charge at Lone Pine, Gallipoli on 8 August 2015 and reported missing in action the same day. After months of court investigation he was declared killed in action, although his body was never recovered. Eyewitness statements in this packet show that strong bonds were formed between soldiers at the frontline.

Private Wesley Paul Choat escaped from Dülmen prisoner of war camp in Germany in December 1917 and walked to safety in Holland. Sapper Edward William Earl, a member of the 1st Tunnelling Company, was trapped in a collapsed mine shaft under Hill 60, south of Ypres. Earl made his will and wrote a letter to his mother while entombed. He also listened in on the German tunnellers, but did not send his own signals to be rescued in case they were heard and gave away the Australians’ position. Corporal Oliver Erskine Winter, 50th Infantry Battalion, served at Gallipoli and in France. He was awarded the Military Medal for bravery in the field in recognition of his actions at Noreuil on 2 April 1917 when he led his unit through the village after several NCOs had been shot. 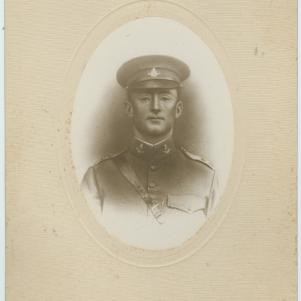 Lieutenant Eric Wilkes Talbot Smith was one of the first South Australians to attend the Royal Military College at Duntroon. At the outbreak of war he was commissioned as a lieutenant in the 10th Infantry Battalion. The 10th were part of the covering force for the landing at Anzac Cove on 25 April 1915 and were first ashore around 4:15 am.